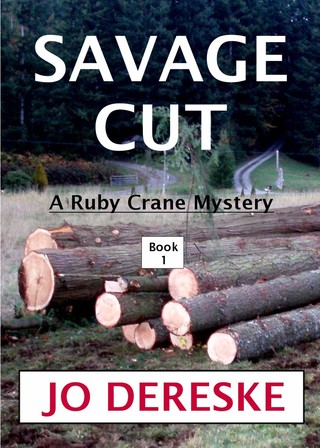 The first book in the Ruby Crane series 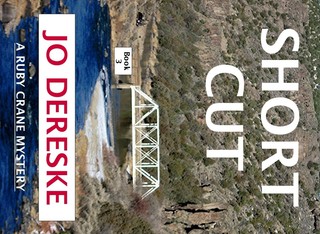 The second book in the Ruby Crane series

She was the prodigal daughter, returning to the Michigan hometown she'd fled in disgrace seventeen years before. But now Ruby Crane is back at her family's isolated lakeside cabin--alone except for her fourteen-year-old daughter, Jesse, who is recovering from a debilitating head injury. Ruby's job as a forgery expert at a California detective agency is behind her now. Jesse's recovery is her priority, that and trying to ignore the rumors about her return.

Savage Cut
The first book of the Ruby Crane series

From Chapter Three:
The black and white collie turned in agitated circles near the door, paying no attention to Ruby.
A hand touched Ruby's arm and she gasped and spun around, meeting Mina's white face and panicked eyes. Mina spoke but Ruby only made out the word, "happened."
Ruby gripped Mina's shoulders, squeezing the narrow bones to emphasize her words. "Don't move," she shouted close to Mina's ear. "Stay here."
Mina nodded and Ruby took two long strides toward the sawmill, assaulted by the deafening sound of the engine. She swept her eyes across the scene. The still whirling ciriicular saw blade, the piled logs and freshly cut lumber, comprehending without allowing herself to actually see the man she'd just met, who five minutes ago had stood in his kitchen, looking adoringly at his wife, now ripped apart by the spinning saw.
She turned back to Mina who stood where Ruby had left her, a tiny figure holding her hands in fists at her sides. Ruby was struck by the resignation on Mina's face. Resignation and heart-breaking sorrow, but not shock.

Cut and Dry
The second book of the Ruby Crane series

From Chapter Eight:
"It was Phyllis," he said. "She's..." Again the confused look. "Will you call her?"
"I don't even have her phone number," Ruby told him. "We're not in the habit of chatting."
"She's your sister, Ruby. Just give her a call. She's been...upset."
"What about?"
Her father shook his head and wiped his mouth with the back of his veined and spotted hand. "She doesn't say anything's wrong. It's in her voice."
Phyllis was the older, the more beautiful, the more successful, her father's favorite. "Believe her, then," Ruby said curtly. "I won't promise to call her."

Short Cut
The third book in the Ruby Crane series

From Chapter Two:
Ruby gently pulled back the quilt. Phyllis still wore the same stylish clothes, now wrinkled and twisted. Ruby didn't need to place her face as close to Phylis as Hank had; she could smell the alcohol. Her father hadn't been able to, and the idea that his favorite daughter could drink herself into a stupor hadn't occurred to him.
She pulled the quilt back farther and saw the glint of glass between Phyllis's leg and the couch back. She reached across Phyllis and pulled it out: an empty bottle of Glenlivet. Phyllis had always had expensive tastes.
The white wristband had slid upward on Phyllis's left wrist. Ruby tentative touched Phyllis's hand. When her sister didn't move, she turned her hand over, bracing herself for the sight of a thick scar, a sign that Phyllis had attmpted suicide.
On the inside of Phyllis's wrist was a tattoo: a black dotted line crossing her flesh with the words CUT HERE printed above the line.